Road Trip is like a blank canvas where you can put in any color you want. It brings in – the comfort of driving around one’s own vehicle, freedom to decide the route & hassle-free detours, flexibility to stop on the way at any time and the power of changing the destination at the last minute.

Our epic 10-day winter road trip – all the way from New York to Miami was one of those spontaneous trips. We decided to embark on this East Coast journey during the Christmas vacations. Packed our bags in less than two hours, loaded the car and we left home around six in the evening (just five hours after we came up with the idea).

We looked at the map in the car and placed a few pins & the first one was on Richmond. By late night, we were driving by Philadelphia, Baltimore, Washington D.C. on I-95. It was an easy drive, we stopped on the way for dinner and checked into a hotel around midnight. In few hours, we drove through seven states (New Jersey, New York, Pennsylvania, Delaware, Maryland, D.C. & Virginia).

Following day, was for sightseeing – so we left the hotel by ten in the morning for Monument Avenue Historic District, which is famous for its beautiful architecture & the statues of Robert E. Lee and others. The buildings there are really breathtaking and as it was Christmas time – the houses & the streets were decorated with red & green ribbons and that added to the beauty of everything.

Guided by our map, we took a tour of the entire city and also had an amazing Mediterranean lunch before leaving for Jamestown in the evening. Its an historic site and we wanted to visit the place for a long time. But, due to the holiday, we weren’t able to enjoy it and left for Charlotte – our next stop. Picked up coffee & some refreshments on the way, and followed 1-85 S for next few hours. Finally, we had dinner late in the night and ended the day in Charlotte.

Next day, we were out by eleven and enjoyed the beautiful city of Charlotte till evening. And were ready to leave for Atlanta after finishing the tour. Drove by Spartanburg on Highway 85 South bound and entered South Carolina within the first hour. The weather was pretty good up till then, but suddenly it became extremely foggy. Visibility was very low, and it almost seemed like we were driving into nothing. It was the craziest ride of the entire trip.

We were in Georgia around midnight and by that time, we had hit the first 1000 miles of our road trip and had driven through nine states. And after a long day and a dinner stop, we checked into a hotel.

The subsequent day was for ‘Sightseeing’ in Atlanta and we were at Pemberton Place at 11:30. Parked our car and got tickets for the World of Coca-Cola – a famous attraction in the city. Had a great time seeing the ‘Vault’, the memorabilia and tasting dozens of coca-cola flavors from around the world. The tour got over in no time, leaving us enough time to visit Piedmont Park and a fun drive around the city.

Later, in the evening we were on our way to Savannah, a historical city. A four hour drive and we arrived comfortably by dinner time. I had heard so much about this place, that I was really looking forward to next morning. We began the day early but due to heavy rains we couldn’t take a guided city tour. Instead, we drove around the beautiful city & had a good time on the waterfront with french colonial architecture, cobbled streets and the dark alleys, it was like the old movies.

Ended the day and moved on to our final pinned destination – Miami. It was an 8 – 9 hour drive, so with a few stops in Jacksonville and Palm Springs, we checked in late in the night.

Everyone would love to enjoy the sunshine, white sands and the ocean in the month of December, so did we. We spent three days there – soaking in the sun – the views were breathtaking with large stretches of white sand along the clear blue water of the ocean. South beach, Bayside Marketplace, Seaquarium, Everglades National Park – it was a fun-filled time. And we couldn’t be in a better place for the New Year’s eve.

Eight days had already gone by and we were looking at a long drive back home from here. The day began at the beach for us, then lunch at Bayside Marketplace and by three in the afternoon, it was time to say bye-bye to Miami.

We decided to drive all the way in one go. And the timeline looked something like this:

It was a very long haul and we did it in 22 hours at a stretch. Drove through almost 11 states – New York, New Jersey, Pennsylvania, Delaware, Maryland, District of Columbia, Virginia, North Carolina, South Carolina, Georgia and Florida; and around 3500 miles (5632 kms), when it comes to numbers.

It was truly an epic road trip and we had the most amazing time. Seeing it on a map makes it even more awesome, the route we took, the places we visited, the distance we covered – its an unbelievable feeling. 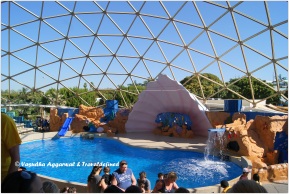