Our Florida trip had to include the ever-incredible ‘Everglades’, with boundless wilderness to see, explore and experience. It caters to the needs of everyone who enjoys nature & its diversity.

We were in Miami for three days and planned to spend an entire day exploring the wild. And the very next morning, we began our tour at the Everglades Alligator Farm with the famous air-boat ride before going to the National Park. The Alligator Farm is a private entity, located outside the entrance to the ‘Everglades National Park’.

Bought the tickets for the 12:25 ride, which gave us enough time to watch the Alligator feeding session in between. The feeding area was crowded with people and alligators, both. But before it began, the park guy briefed us about the daily routine which is followed and talked about some fun facts like what constitutes an alligator’s diet and their resting time. It was so interesting to know more about these fierce animals.

And then the alligators were fed with dead rats (yuck!), which they instantly gulped down their throats after a good fight among themselves. Within minutes, people started leaving as the feeding session got over in no time. We also made our way to other parts of the farm, and enjoyed great views from some of the lookout points.

Clicked pictures of alligators while they were sun-bathing, splashing around in water or just day-dreaming after a hearty meal.

After a good time around the farm, we headed for the airboat ride. The line had already gotten pretty long, but surprisingly, when it was time to get on on the boat we easily got the front row seats. The driver climbed in and very happily, he described the tour for everyone sitting in the front row – yes! that’s us !!

As we listened patiently – the driver said, “You guys will be the first ones getting soaked in the dirty water when the boat takes sudden turns, so hold on tight”.

And then he asked my name, and clearly outlined my tour responsibilities owning to the fact that I was sitting right in the front.

He told everyone, “She will be the one who’ll be saving others by throwing out alligators and snakes every time they land up on the boat”.

And just about when I was trying to make sense of it, everyone in the boat started yelling, “Thankyou”, “You are a Rockstar” & “You can do it”.

We all burst out into laughter, and it was a great beginning to a thrilling ride through the muddy waters of the Everglades Alligator farm.

The ride got over in about twenty minutes and we sure had an awesome time. The crazy fast turns, the rubber alligator looking over the water and the driver’s never-ending quirky jokes –  it was a fun ride. Though we got soaked in the first few minutes of this high speed boat ride, I wouldn’t have given up the front row excitement.

Got out of the boat, thanked the driver and went straight to have lunch where we ordered hot-dogs & juice from the limited menu. And took a relaxing break while enjoying the meal-time.

Later, we entered the ‘Everglades National Park’ and drove through towards the Royal Palms. It took us sometime to reach the visitor center where we parked the car and picked up the Trail maps. From the two available options of Trails – Anhinga and Gumbo – Limbo, we chose the latter one.

A tiny hidden path led us to the trail, and it was like walking through a dense forest. Narrow path where only two people could walk together and it was completely covered with thick tress & bushes which made it appear dark in some sections even during daytime. Surely, it was a crazy experience.

We finished the trail and left for our next stop – all the way to Flamingo, the southern most tip of Everglades National Park. It was a scenic drive through the diverse flora & fauna of the park.

Arrived there around five in the evening and it was the perfect place to enjoy the fabulous views of the Key west islands. And with coffee and potato fries on the side, it was a beautiful day.

Then it was time to go back to the hotel after a fantastic experience at the Everglades. 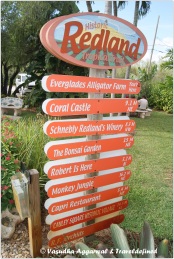 Gumbo-Limbo Trail at the Royal Palms 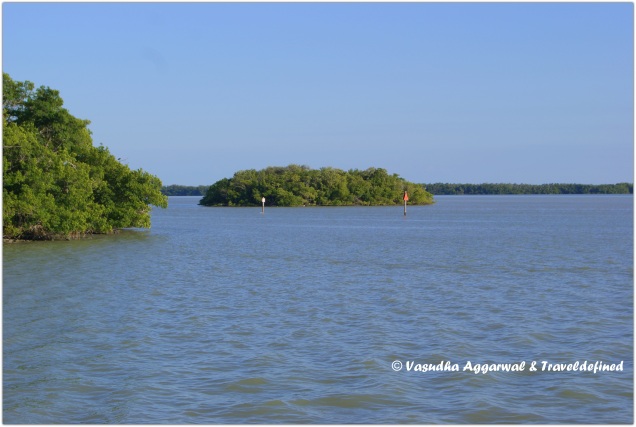