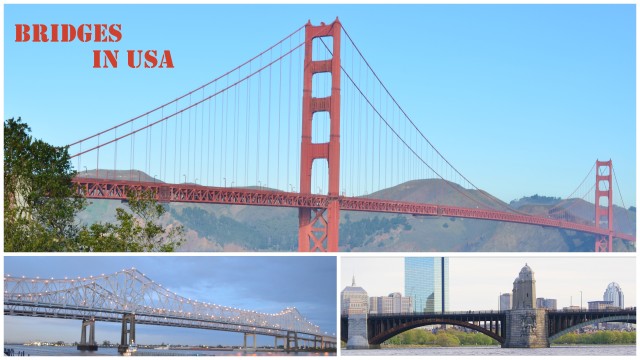 Bridges all over the United States of America, display varied architectural designs & technological details and are the perfect symbols of the modern world. A means of movement across rivers, roads and Canyons, these provide an easier way to the destination.

In terms of structure, basically there are four types of bridge designs – Arch, Truss (Beam), Cantilever and Suspension, as per USA Today article ‘Types of Bridge Designs’ (Link). Depending on the requirements, they come in different shapes and sizes. And some of these marvelous bridges are famous tourist attractions as well, for instance, ‘The Brooklyn Bridge’, ‘The Golden Gate Bridge’ or ‘Bixby Bridge’ in California.

While travelling, we have come across countless bridges and from among those, I have compiled a list of 10 beautiful bridges from around the country (in no particular order).

Beautiful Bridges around the country

1. The City of Bridges – Pittsburgh

This post about bridges should start with ‘The City of Bridges‘ also known as Pittsburgh, in Pennsylvania. It is estimated to have over 446 bridges, according to Pittsburgh’s Action News (Link), built on the three rivers Ohio, Monongahela and Allegheny which meet here. It is one of the few places where you can find multitude of bridges laid right in front of your eyes.

We have visited Pittsburgh many times and its always a delight to visit Mt. Washington which provides a panoramic view of this beautiful city and amazing pictures like the one here.

The iconic New York suspension bridge – ‘Brooklyn Bridge‘, doesn’t need any introduction. Its one of the most recognizable structures on the NY Skyline and almost every movie which is filmed in the city features the bridge.

We clicked this picture from Brooklyn Bridge Park, a prefect place to get an amazing view of the entire city.

Two bridges from the south of the country – ‘Crescent City Connection‘ – Cantilever bridges in New Orleans. The view along the Mississippi river is breathtaking, especially in the evenings when the lights on the bridge gleam in the water and the second bridge behind it looks like a shadow in the sky.

We took this picture from the Mardi Gras World dock along the Mississippi River – on our first trip to the city. It was a fabulous vacation as we enjoyed the Bourbon Street excitement & the delicious Cajun-creole food.

The Rainbow Bridge in Niagara Falls region, is a well-known tourist attraction. It arches over the Niagara River creating a dazzling panorama.

The Bridge connects USA and Canada, and is frequently used by people travelling across the countries. We have visited Niagara Falls numerous times, with friends & family and it never ceases to amaze.

A city where we have lived for almost three years – Bayonne in New Jersey which is just a bridge away from New York. This Bowstring Arch bridge called ‘Bayonne Bridge‘ connects the city to Staten Island and looks splendid on the calm waters of the strait of Kill Van Kull.

This picture was taken from the Bayonne Park on a bright winter day. Its a quiet little residential semi-suburb and is a wonderful place to live.

The Longfellow bridge on Charles river, categorized as an arch bridge is in the amazing city of Boston. The piers of this bridge are exquisitely sculpted like a masterpiece of concrete & steel floating on the water.

Our April trip to the city was fantastic which included a Harvard Tour and the famous Boston Duck tour (quack!, quack !). We clicked this picture while on the duck tour, though it was a little chilly, we enjoyed sightseeing till late in the evening.

The famous Bixby Bridge in California, is another one of the most recognizable structures in the country. Situated on the impressive Pacific Coast Highway, its a breathtaking sight and further, adds to its beauty.

This picture was taken on a cloudy day in Monterey on our way to Los Angeles from San Francisco. What a memorable trip it was.

This is the Talmadge Memorial Bridge (cable-stayed suspension bridge) in one of my favorite cities Savannah in Georgia. From afar, the bridge seems to be effortlessly sailing through the air & enjoying another sunny day. 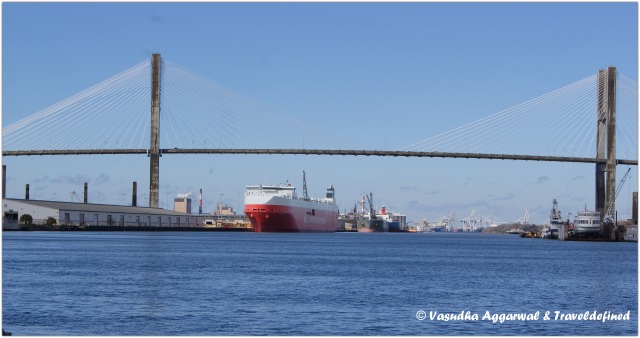 Its a place for all seasons, with its old world charm along the Savannah river. We experienced the charm of this lovely city last December & loved it. The River Street was breathtaking and we couldn’t resist ourselves from clicking some amazing pictures including this one.

The Mike O’Callaghan – Pat Tillman Memorial Bridge, also known as Hoover Dam Bypass Bridge connects Nevada and Arizona over the Colorado River. Another engineering wonder, built recently in 2010, it presents a picturesque background when seen from the Hoover Dam.

This picture was taken from Hoover Dam. The bridge fits so well in the entire frame, as if it had always been there. And it also affords great views of the majestic Dam and Colorado river.

When we talk about bridges, the Golden Gate Bridge in San Francisco has to be mentioned. It is one of the most stunning suspension bridges in the world.

On our California trip, we spent a few days in San Francisco and really loved the city. The Orange colored bridge over the San Francisco Bay – makes a gorgeous picture, like the one above which we clicked from Crissy Fields.

This is a list of beautiful bridges – I have come across.

Which of these have you seen ?